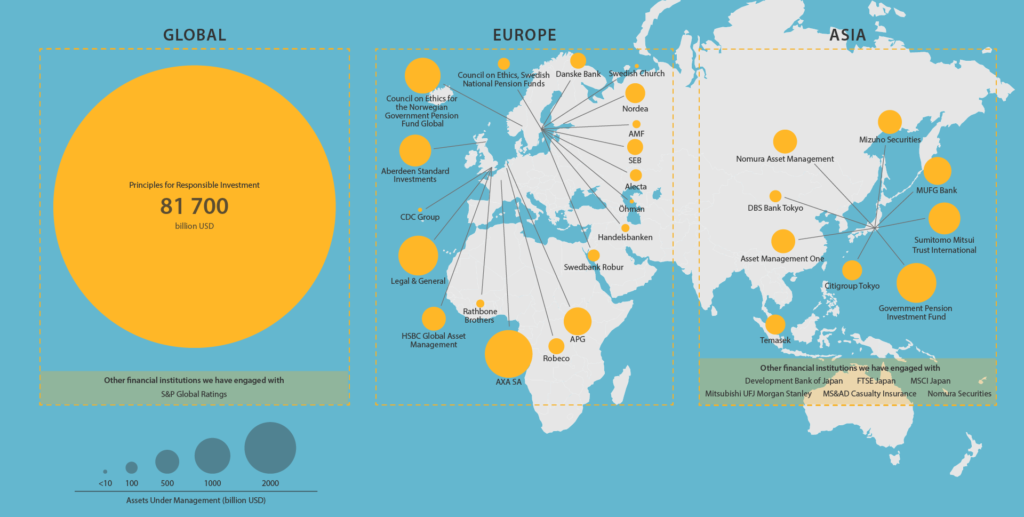 In late 2017, we set out to identify, map, visualize and communicate how global financial flows underpin large scale modifications in the world’s ecosystems with repercussions for the stability of the Earth’s climate system. In May 2019, we concluded the first phase of this work with add-on funding from the Swedish innovation agency Vinnova and the project “Earth system finance – a new approach to finance and sustainability” in close partnership between the Global Economic Dynamics and the Biosphere Program (GEDB), Future Earth, and the Stockholm Resilience Centre (Stockholm University).

It has been incredibly exciting years with not only two high profile research papers (one about tax havens and the Amazon, and the second about financial giants and “tipping elements” in the climate system), one report for the finance sector, and somewhat unexpectedly large media attention for our work with articles in the Guardian, Le Monde, El País, and many others. Our work has also been featured in the New York Times as part of a global discussion about the risks of increased deforestation in the Brazilian Amazon in the face of Bolsonaro’s presidency (see image below).

Important to note however, is that we have engaged in numerous close dialogues, discussions and talks with a wide diversity of financial institutions. Some of them have been invited by us to organized closed dialogues hosted in Stockholm, London and Tokyo during 2018 and 2019. Most often however, it has been at the request from financial institutions themselves, where we have shared insights from our work, learned from many of the best in the sector, and discussed limitations and possibilities for finance to help build resilience in biomes associated with “tipping elements” in the climate system. In other words, an interesting and different experiment in the co-production of knowledge for Earth system resilience.

The map above in the header provides an illustration of the financial institutions we have engaged with in some form in the first phase of our work. It also shows their Assets Under Management (AUM) as a very simple metric of the scope of our engagements. We look forward to continue our work at this important interface between the sustainability and Earth system sciences, and finance.